We did it for one reason — to give Austin voters a chance to take back our city from the real estate lobby “growth machine” that is driving up the cost of living and continues to offload hundreds of millions of dollars in public infrastructure costs onto the backs of current residents to pay for all the new developments.

They can’t get people to move here fast enough, while we try to figure out how we can afford to stay here.

This ain’t about the bag ban, it’s about sacking those who have made our town just one big real estate play — at our expense!

Let’s take our city back, once and for all of Austin, y’all! 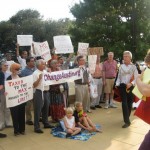 Since 2009, ChangeAustin.org has been working in a variety of ways to address the unfair burden placed on homeowners under a property tax system that badly needs reform. We are delighted that many of the candidates running for City Council in November are beginning to address these issues.

We’re going to step on a few toes. We’re endorsing Sarah Eckhardt for Travis County Judge and we’re going to do a little truth telling on her opponent Andy Brown, a story which we’ve been sitting on since 2008.

This is the hottest race in Travis County and everyone knows this critical position will be decided in the Democratic primary. Moreover, we think Brown will bow to the same powerful interests donating to his campaign that seek tax subsidies, tax breaks, and special favors.Let us explain and please pardon the length of this message.

Sarah Eckhardt served 6 years on the Commissioner’s court with integrity, honesty and in the spirit of cross-partisanship. We may not agree with every vote Sarah’s ever taken – but she is not bought and paid for and she has stood firm while the rest wilted.

Watch the debate between Sarah and Andy. It’s very clear that Brown is not up to the job. He has no experience, unless you think that being a chair of a political party counts as the “experience” needed to be the chief executive of a county with an annual budget of $850 million. No matter how many times Brown says, “I’ve had 20 years experience bringing people together for progressive causes to get things done,” we remain unconvinced. (Again, watch the video on our home page, you’ll see for yourself.)

Here’s what we haven’t talked publicly about:

Brown played a particular role in defeating Proposition 2 in 2008, the effort to stop the Domain shopping mall subsidies supported by 26,000 signatures and 500 local businesses and all 4 political parties. Despite the overwhelming endorsement of the Travis County Democratic Party Executive Committee (by a 58 to 7 vote of the precinct chairs), Brown found various ways to sabotage the endorsement and prevent it from reaching the party’s enormous list of supporters. The precinct chairs had specifically asked Brown for an immediate press release of the endorsement, which he assured them would happen.

Instead, Brown stonewalled the promised press release for a month until early voting was almost over. He refused to allow Prop 2 literature at events and wouldn’t even allow a sign up with all the other endorsements at the headquarters building. Brown either participated in, or stood by and watched others create such confusion about the party’s endorsement, that many of the hundreds of volunteers that year who hit the streets and doors for Obama thought the party’s position was to defeat it. Many of these good people were at the early polls asking people to vote against Prop 2. It was defeated by just 2%.

Friends, we hope you will agree that Travis County Judge is not an entry-level position or suitable for political operatives. Next email we’re going to tell you more about where Andy’s money is coming from, so hold on to your hats.

ChangeAustin.org has our own campaign we’re running for Sarah. We’re going to run some inexpensive ads on the internet and, if we raise enough money, some sassy radio ads. If you can give, please do so! 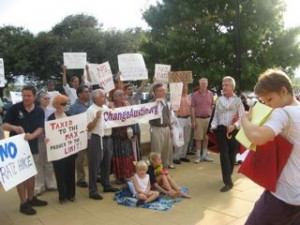 ChangeAustin.org proudly endorses Kathie Tovo against current Austin City Council incumbent Randi Shade in the runoff election for City Council, Place 3 based on Shade’s refusal to oppose a taxpayer subsidy to Formula 1 racing and her opposition to fair geographic representation for Austin voters.

The endorsement acknowledges Kathie Tovo’s opposition to city subsidies for Formula 1 and her enthusiastic support for fair geographic representation (single-member districts) combined with a process that would take the redistricting process out of the hands of the Austin City Council and put it in the hands of a non-partisan redistricting commission.

ChangeAustin.org was co-founded by Brian Rodgers who fought the Domain Mall subsidies and most recently broke the story on the Austin City Council’s “round-robin” open meetings violations. Rodgers said, “It is clear to us that Council Member Shade supports subsidies for Formula 1 and can’t see past the cockeyed economic projections put forth by State Comptroller Susan Combs and the promoters and billionaire owners of Formula 1.  Spending $290 million of taxpayer money on a sports franchise in the midst of school closures and social service cuts is a despicable act of runaway government.  In addition, Shade does not support geographic representation for city council elections, even though all council members live inside the central city.  ChangeAustin members living outside the central city feel politically marooned and have shown enthusiastic support for single member districts while Councilwoman Shade has been pushing a process to keep just another version of the at-large system in place.”

In contrast, Kathie Tovo has run commercials alerting Austinites to the proposal to help divert tax dollars to Formula 1.  She also enthusiastically supports single-member districts and believes changing our current system will ensure more geographic representation on the City Council and produce more economic diversity among candidates. She believes Council races have become very costly and time-consuming, which discourages many excellent candidates from pursuing public office. She has also said she will work with the City and community stakeholders to hold a series of public hearings across the community to allow the public to decide what Austin’s new system should look like. This includes a non-partisan redistricting process to take the politics out of drawing district lines.

ChangeAustin.org has a flier they’re asking voters to circulate in their communities and on the internet which can be found here.  Live phone calls are now underway to reach thousands of Austin voters who opposed the Domain subsidies in 2008.

Linda Curtis, co-founder of ChangeAustin.org, said, “We are calling on ChangeAustin.org’s supporters to help us break through the cynicism that Austinites feel about their officials — a big reason why they’re not voting.  It will take neighbors talking to neighbors to help get folks to the polls.  We need your help to reach 12,000 of our supporters!”

Brian Rodgers presents his research into the negative impacts of rate hikes for water treatment in Central Texas.