Just when we might have imagined that CAMPO’s history of generating developer-centered transportation planning couldn’t possibly produce a result worse than their previous plan, they have managed to pulled it off.

CAMPO has just gotten the results of its latest planning, and it predicts nightmarish peak hour congestion throughout Travis, Williamson, and Hays Counties in 2040, even if we spend $32 billion on roads and transit by then. And now this vision is likely to become Austin’s legally binding growth blueprint. How did this happen?

To review the current planning situation, CAMPO is the regional, federally sanctioned, transportation planning body for Austin and the surrounding six county metropolitan area. Every five years, CAMPO is required to come up with a new long range plan to get federal and state (mostly gas tax) money for regional road and transit projects. The new 2040 Long Range CAMPO Plan now being debated, modified, and must be approved in time to take effect in May 2015, replacing the CAMPO 2035 Long Range plan that is currently in effect.

CAMPO of course outranks the City of Austin in its bureaucratic pecking order, since it is a federally sanctioned planning body that controls the local spending of federal gas tax money. Given Congressional gridlock, and the fact that federal supervision of both the FHWA and the FTA are weak and chronically starved for money. There isn’t much federal planning supervision except that the local MPOs, the federally assigned planning bodies, have to follow the very explicit rules and deadlines in the federal code which govern the allocation of the shrinking federal money. Meanwhile TxDOT, controlled by Rick Perry’s road-centric appointees, is in a strong position to control CAMPO and other MPOs because of their control of the local allocation of Texas fuel tax revenues for roads.

As background, here is how I described the the CAMPO politics and policies as they were unfolding earlier this year: http://www.theragblog.com/roger-baker-can-austin-survive-the-current-texas-drought-2/

More recently, I wrote about the planning problems that were emerging at CAMPO a few months ago. So many projects had been submitted for state and federal funding eligibility, more than 800, that they crippled the travel demand modeling software. Go here to read about this: http://www.theragblog.com/metro-roger-baker-is-austins-strategic-mobility-plan-smart-planning-or-a-billion-dollar-boondoggle/#roger3

Now the federally permitted planning time left is growing short. The CAMPO Technical Advisory Committee (TAC) is a subcommittee of regional planning employees who review the planning and make suggestions to their bosses, the politicians on the CAMPO Policy Board, who approve the final plan. See the top of this link for notice of the Nov. 19 meetings described below: http://www.campotexas.org/meeting-agendas/  (Staff has started to make audio recording of the TAC meetings, where emerging transportation problems often first become public).

Johnson apologized to the TAC during the Nov. 19 meeting for the poor quality of the new $32 billion 2040 plan. Perhaps he might have have apologized for lacking the political clout to question the bizarre demographic projections he is in charge of shaping into Austin’s new federally sanctioned regional plan. His job is to plan the transportation infrastructure to support CAMPO’s adopted growth assumptions which are as quite congestion-conducive and transit-hostile by their nature, since they put most future regional growth outside Travis County.

The job of CAMPO Director is really a political balancing act. CAMPO’s previous director, Maureen McCoy, is said not to have been sufficiently compliant with the CAMPO Policy Board’s desires. She decided to retire in the middle of the new 2040 Plan effort, in early 2014.

Now CAMPO’s big suburban sprawl growth projections are beginning to cause serious planning problems, particularly given that funds are running short at all levels of government. Without the feds enforcing the basic credibility of CAMPO’s demographic planning assumptions, things can get out of hand.

CAMPO voted to double the CAMPO regional population by 2040 to over 4 million, while putting 70% of this growth outside Travis County, without ever considering and water constraints on new development. These extreme sprawl development projections predictably play out as horrible congestion, far far worse than we have now. This is while straining to assume that the CAMPO region will actually have $32 billion of funds by 2040 to spend on this new long range plan. Grandiosity in planning leads to bizarre road needs, like the requirement for the congestion reliever loop around Luling now being proposed in the draft plan, where it competes with much more acute current funding needs. 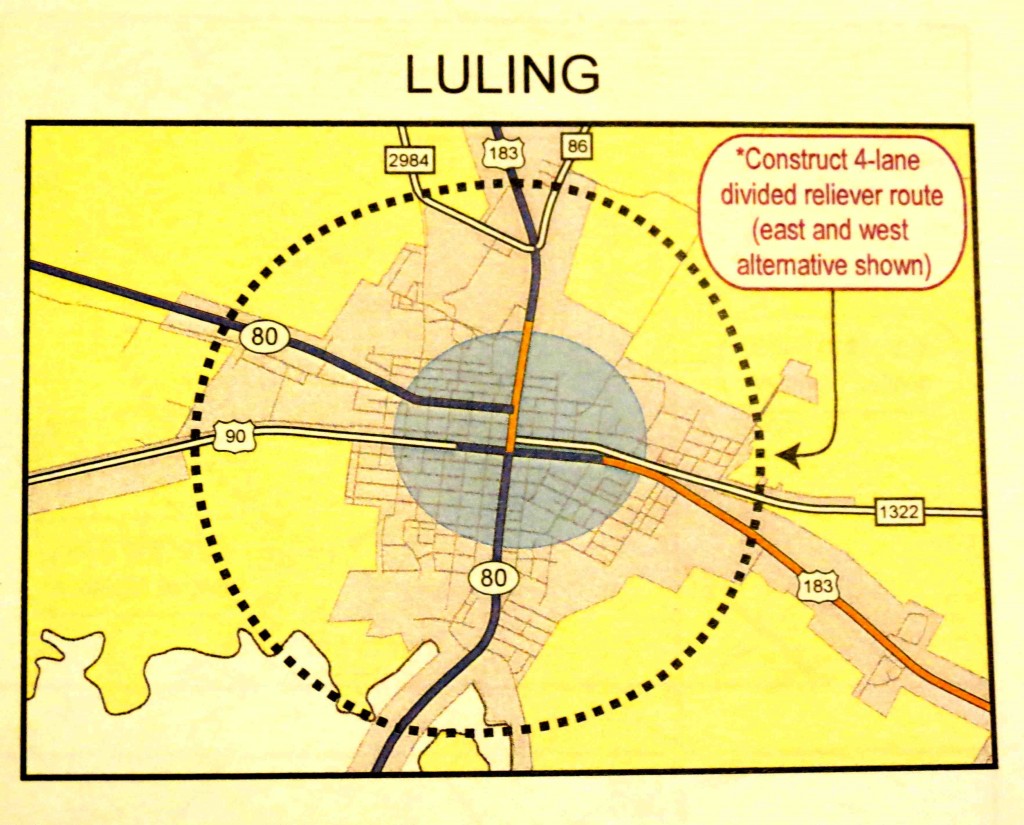 On Nov. 19, at a long meeting that lasted from 10 am to 3:30 pm, the CAMPO Technical Advisory Committee (TAC) saw and heard the consultant’s end result travel demand model output of the demographic projections approved by CAMPO over a year ago. CAMPO started this new 2040 planning by voting on their future growth and their budget by 2040. Now the consultant is describing conditions on the roads and transit based on a non-transparent private consultant modelling process (conducted by the CDM Smith firm). The public gets to see the end results displayed by the final results (termed “benchmark runs” on the CAMPO “four step model”, calibrated to year 2010).

The new planning output first publicly appeared at the TAC meeting as a wealth of dozens of computer generated maps showing roads, future roads, congestion levels, etc. Given the assumed and approved demographic input, this end result looks like an explosion in suburban sprawl development made possible by $32 billion worth of publicly funded roads and transit. The downside is that the result the consultant expect is terrible congestion covering a huge geographic area.

The CAMPO Board only gets to choose between two closely related sprawl growth scenarios. The congestion modeling process got so overwhelmed with hundreds of proposed road projects that it crippled the computer model. The modelers didn’t even try to model the bike or pedestrian modes of travel.

According to the adopted CAMPO financial projections, an increasing share of the cost will come from local taxpayers, like the increased property tax we saw in the recently defeated billion dollar bond proposal.

Garbage in leads to garbage out. The end result of the assumed future development in the CAMPO plan now in the works is realistically unaffordable, because future revenue was exaggerated from the day the CAMPO Policy Board voted to assume future CAMPO revenue would be $32 billion. Given a massive degree of suburban sprawl development, primarily on future hypothetical vehicle travel, the Plan is plagued by horrific congestion. Such is predictable result of developer-centric  planning, lacking sensible growth priorities, and assuming that driving behavior will never change. 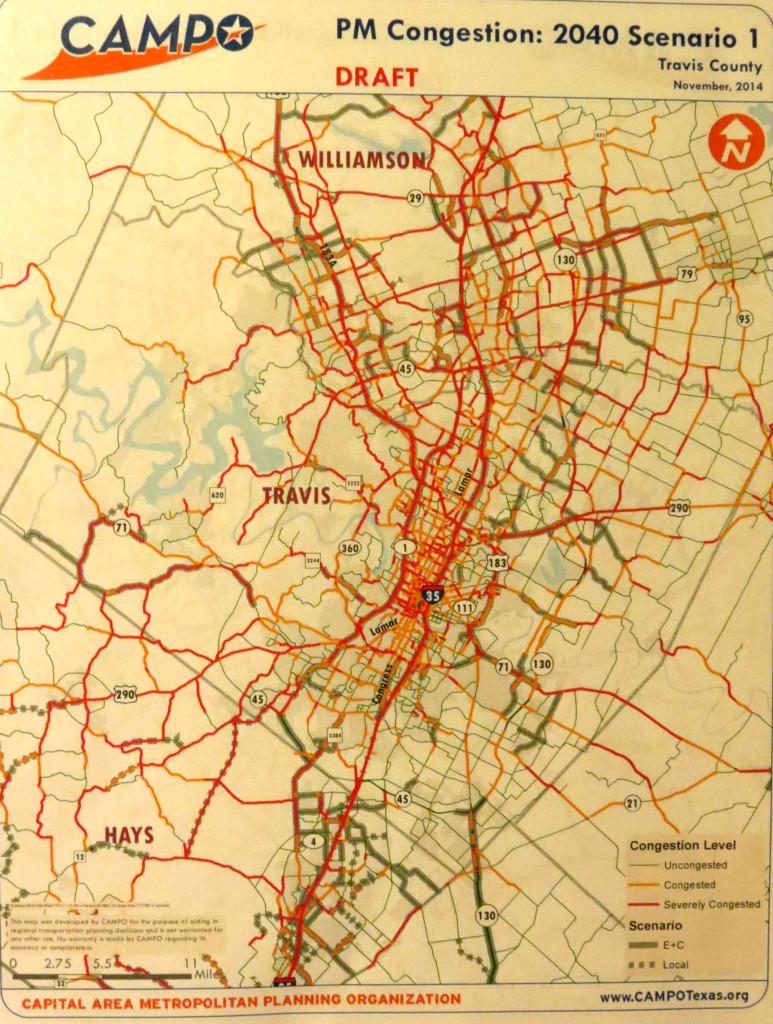 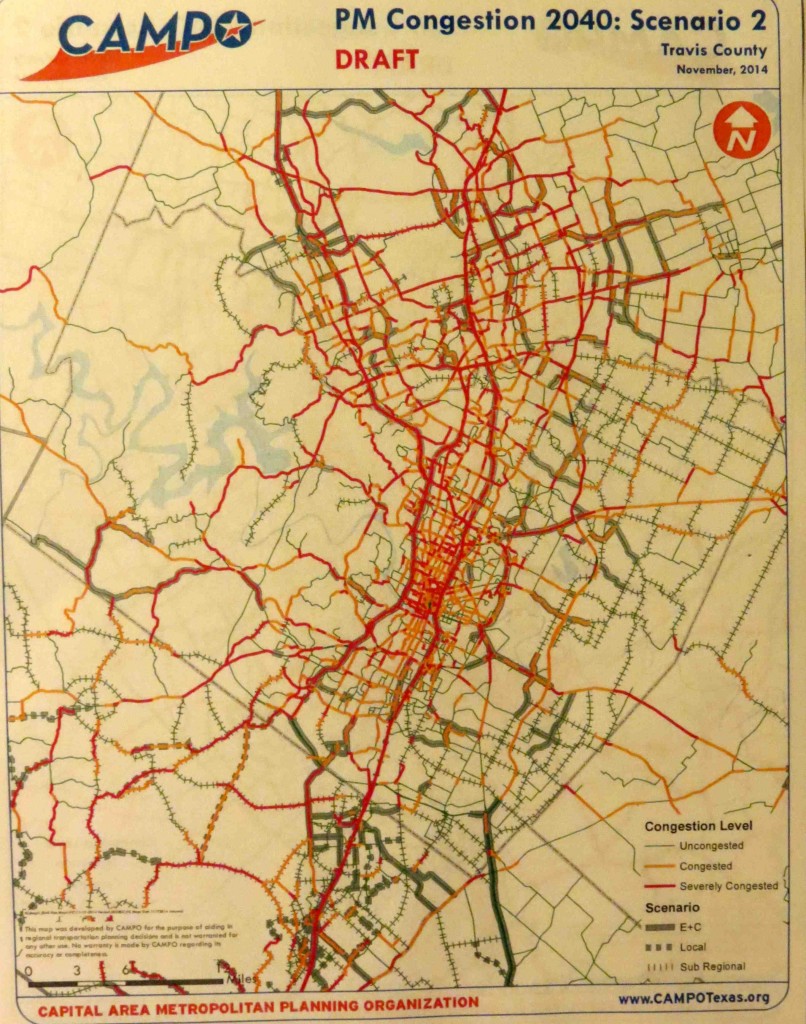 All this is complicated by the fact that the billion dollar rail and road component that had been assumed has disappeared with the recent road/rail bond failure. This is what I wrote about this proposal before it got defeated, which has additional background on CAMPO policy and politics.

Here is why the Austin rail bond deal was recently defeated so badly — my own postmortem political autopsy. http://austinrailnow.com/2014/11/20/lessons-of-the-austin-rail-bond-defeat/

The newly released consultant’s future modeling maps show a very high level of projected future congestion which results in large part from the sprawling growth assumed — through assuming doubling the future population to over 4 million with 70 % of this growth going into the suburban counties outside Travis! From now until 2040, we shall see yearly job growth of 6.7% as one predicted implication of CAMPO’s expansive demographic assumptions. Such were the CAMPO staff and the consultant’s marching orders, in accord with the Policy Board’s future land development wish list.

The CAMPO staff felt they had to inject a certain element of adult supervision in choosing plan priorities, lacking any other policy input from either the CAMPO board or the TAC. The staff has assumed that money for IH-35 in particular needs to proceed ASAP, as a top CAMPO priority. IH-35 is a high TxDOT priority, and is politically bulletproof, with plans for widening it in the CAMPO area already underway by TxDOT.

In fact, there is no realistic way to “fix” a road like IH-35, given the year 2040 demographic growth levels being assumed. There is no realistic way to keep congestion on the central Austin portions of both IH-35 and MoPac from being so severe already that drivers on these roads will not be increasingly unhappy. Based on the net increase of about 70 new drivers a day moving into the Austin area, there can be no plausible congestion relief. Austin is already being gentrified, which strongly promotes peak hour commuting traffic from the suburbs on all the main access highways.

This being the case, the CAMPO politicians now have to proceed with sanctioning their fragrantly dysfunctional $32 billion plan. Their sprawl growth wish list is rapidly becoming a a curse by becoming a legally binding plan that, if it comes to pass, means terrible congestion everywhere.

The TAC planners have in effect been caught off-guard, hoisted on their own petard of unrealistic planning. They are distinctly unhappy to see they now have to make important road funding priority decisions that need to be made much too fast for comfort. At their Nov. 19 meeting, the TAC decided to hold a specially called meeting on Dec.1, to  try to meet the federally imposed planning and funding deadline.

This meeting is essentially for damage control — to try to make reasonable priority recommendations to the CAMPO board, likely by throwing out or postponing wish list projects like big new highway loops around rural towns like Marble Falls, Burnet, and Luling. Projects meant to stake future claims to road funding that would subsidize sprawl development.

Ex-TxDOT engineer Bob Daigh, now a Williamson County transportation planner, stressed to TAC the need to establish reasonable and rational road priorities because the advance right of way preservation needed to solve current demand is becoming a serious problem, This requires reasonable priorities to decide which projects are really needed in the near future, since the power of eminent domain is getting harder to use, and funds are short (just try to tell a current resident or a developer that they need to make a personal sacrifice, and at a low cost, to preserve right of way way for a needed road that lacks full funding!). The expansive overload of hundreds of projects in the new CAMPO 2040 plan scenarios don’t recognize the importance of near-term roadway priorities or ROW preservation

No matter what, the CAMPO 2040 Long Range Transportation Plan must now be approved in its final form by this coming May. The new plan, warts and all, will then dictate Travis County and Austin future growth policy, by authorizing the use of state and federal funds for CAMPO’s major transportation projects.