This page was posted for the 2014 primary election. We rarely endorse in primaries, but decided to support Sarah Eckhardt for Travis County Judge over Andy Brown. Some folks have asked us to keep the page live to show what we did and how. We thoroughly enjoyed supporting Sarah as well as Brigid Shea. We certainly do not claim that ChangeAustin.org won the primary for them, but we did our part. Both of these strong women will likely win the general election this November to then begin serving on the Travis County Commissioners Court in January 2015. Enjoy!

Welcome to our page for the primary election 2014 (early voting is Feb. 18-28), specifically dedicated to the hottest contest in Travis County — the Travis County Judge election. That’s the race between former County Commissioner, Sarah Eckhardt and former Travis County Democratic Party Chair, Andy Brown. In all likelihood, this critical race will be decided in the Democratic primary not the general election in November. (Don’t know what the Travis County Judge does? Click here to find out!) Need to check your voter registration? Go here. Click here to know where to vote early. (Note: on election day, March 4th, you can vote at any poll in the city!)

ChangeAustin.org has endorsed Sarah Eckhardt.  In our view, Sarah may not exactly be Wonder Woman, but she’s damn close! 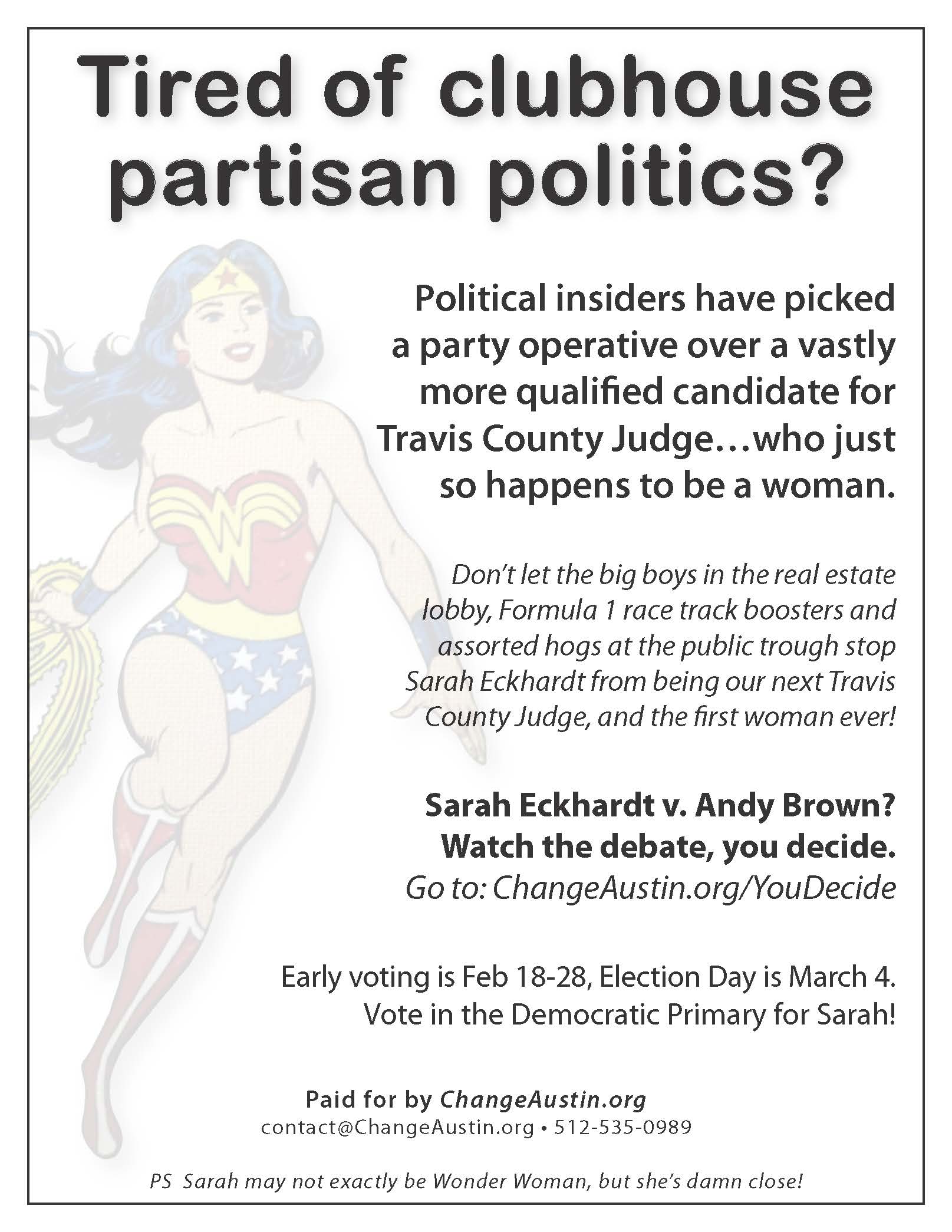 Please note that Texas has “open primaries” – you can vote on either side, but not both, in the first round.

Though ChangeAustin.org is a cross-partisan outfit (we work with all sides on issues that unite us — like stopping the Domain mall subsidies and passing 10-1) if you live in Travis County, we are urging you to vote this year in the Democratic primary on this critical race.

The Travis County Judge is the chief executive of the county in charge of a budget of over $850M and 5,000 employees. In other words, it’s ALL about affordability and tax equity and County Judge is, as Eckhardt has said, “not an entry level position.” Brown has never held public office before and is mainly a political operative (not just in our view!).

Here’s a few salient points about our beef in this important race. (Though, perhaps all you really need to know is in the real debate video on home page. Watch it and You Decide!)

Party Mis-Management: Many Democrats in our circles are perplexed about why political big fish Kirk Watson and Lloyd Doggett are pushing Andy Brown. We cannot answer for them, but you — Travis County voters — certainly can! Here’s some poop from activists within Democratic Party ranks that we think is very instructive.

Sarah Eckhardt has been one of the lone honest, intelligent and gutsy voices out there.

She has been outspoken against Formula 1 subsidies, who has worked to close loopholes in our historic preservation system that some mansion owners are gaming. She’s put this on her website and her votes are on record. We haven’t seen or heard anything from Brown about his position on these issues (we’d love to be corrected) and we know what he did to keep the public dollars flowing to the Domain Mall in 2008.

Over 4,000 people are moving to the Austin area every month. Corporate subsidies are on the uptick — these companies would likely come here anyway, folks! In our view, the race for Travis County Judge is all about the  growth lobby (real estate and related industries) bringing people here too fast for the infrastructure to catch up AND  offloading of the costs of growth onto current residents. The folks who advocate for this unsustainable growth have been lining up behind Brown.