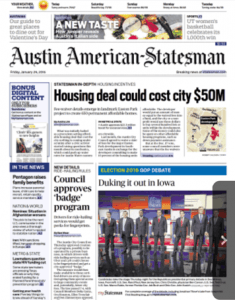 While it appears Austin Mayor Steve Adler was hoodwinking his trusting Council by diverting $50 to 80 million from the struggling water utility to subsidize 650 houses outside of the Austin city limits, one wonders where the hell the City Manager was.

The City Manager, Marc Ott, is required by law to prepare a “fiscal note” on each reading of a proposed ordinance stating its economic impact on the City’s budget before submitting it to the council. Ott failed to do so on all three readings — leaving the fiscal notes completely blank every time. This misled the Council to think there was no fiscal impact.

After a 22% water rate increase last year alone to cover costs, you would think Mr. Ott would lift a finger to protect the utility and its customers from this latest looting which will cause further rate increases. Not so.

Enough is enough. City Manager Marc Ott needs to be replaced and the 10-1 Council members deserve their own handpicked city manager who will respect their authority and shoot straight.

Ott’s performance review is in the next few weeks. Tell the Mayor and City Council you want this Pilot Knob deal nullified and to have the ordinance process repeated legally with the true costs discussed openly.

Get to work Austin. Stop this sneaky deal.

← Our friend, Richard Franklin
The Mayor has an uber problem alright – Pilot Knob →